Camping is only allowed at Blackpot during the weekends, it being such a lovely location and all, so we wake up early on Sunday and pack up our tents. Karla suggests we check out the Hanakapiai Falls, a leisurely 8 mile hike up boulders and through mud, and since Kalalau refused itself to us this time around, we contend with just a day hike.

This turns out to be the BEST IDEA EVER!!!! The trail is mostly dry, the weather is perfect and we already have five days worth of bars, snacks and dried fruit, so we proceed. At this point, words cannot do this trail justice, so I’ll let the photos speak.

View from mile 1. In the background, that very last point jutting out, is Kalalau beach.

At Hanakapiai we were surprised to find a small lagoon on the beach. When we were there last, in wintertime, the beach was half its size and there was no lagoon.

We picnic at Hanakapiai beach, 2 miles into our 4 mile hike to the Hanakapiai falls. Time to consume some of those provisions we stocked up on the first day. After this, it’s back to the trail, onward and forward. And much of it, upward….

Awapuhi was introduced to the Hawaiian Islands in the canoes of early settlers. It’s also commonly called ‘shampoo ginger.’The flower head is filled with an aromatic slimy liquid that is, apparently, the wild man’s shampoo… 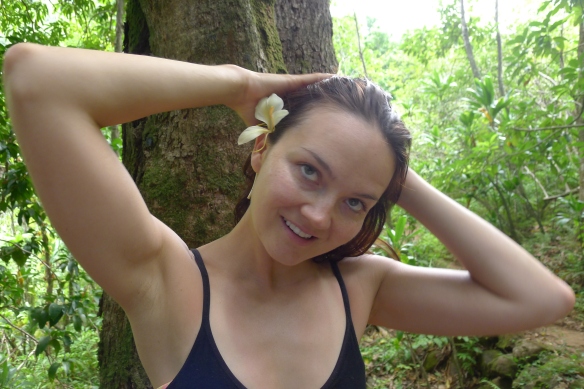 Rubbing in Awapuhi goo all over my hair. I’m going for that $100 salon-shine, for free. Thank you Mother Island!

Contestant No. 1: A beautifully executed “holding my bladder” jump, into the pristine pools of water a few miles before the waterfall. But what will the jury think…? 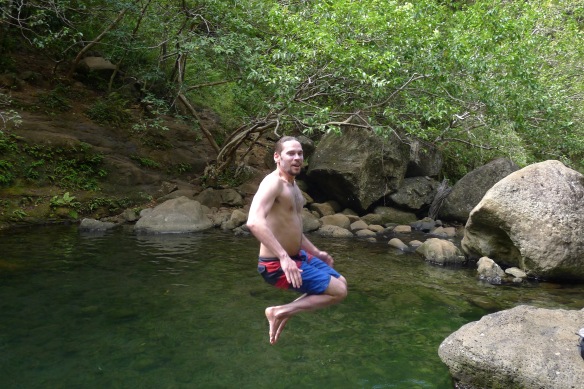 Contestant no. 2: The “Sitting Frog” pose. Jury awarded it first prize, even though mine was more ambitious. (Apparently I had slight execution problems, like keeping my eyes shot the whole time…)

Rock hoppin’ all the way to the falls 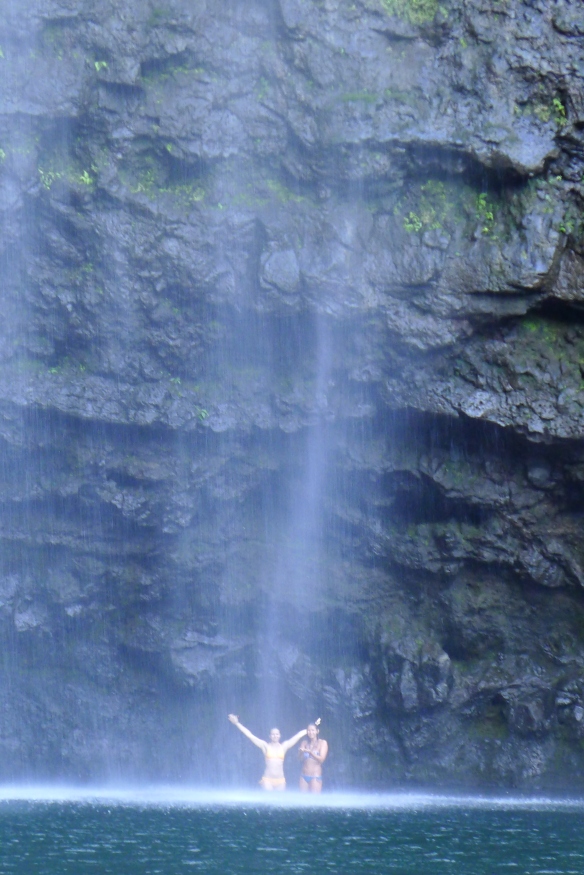 The Hanakapiai waterfall is about 300 ft. high. The best part about it is that you can swim through  (if you don’t mind the icy water) and stand on top of some rocks directly behind it. We took in the luxuriantly green vista around us, and a nice, long, cold shower, at the same time… 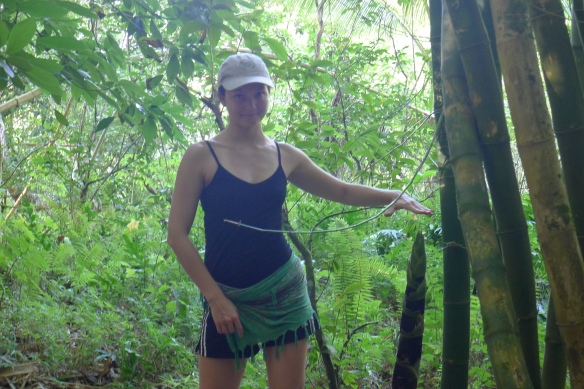 These humongous asparagus look-alikes are new bamboo shoots. Bamboo groves punctuated the trail from the beach to the waterfall, and underneath their moaning emerald canopy, it seemed like time stood still. We found a few other interesting things in the bamboo groves…

… like this ancient-looking fireplace, part of which seemed to be built out of rocks old Hawaiians used to enforce their taro terraces. For a moment we imagined who could live in a bamboo-grove living room, with a lava rock fireplace and what kind of photos they would put on the mantle. “Auntie Pele on vacation in Kauai” or maybe “Grandma Poli’ahu snowboarding,” or “Uncle Kāmohoaliʻi going for a swim” …. *smirk*

Quick water stop on the way back from the falls, again at Hnakapiai beach, right before sunset. The heat is starting to subside a bit.

Getting close to sunset at Hanakapiai Beach 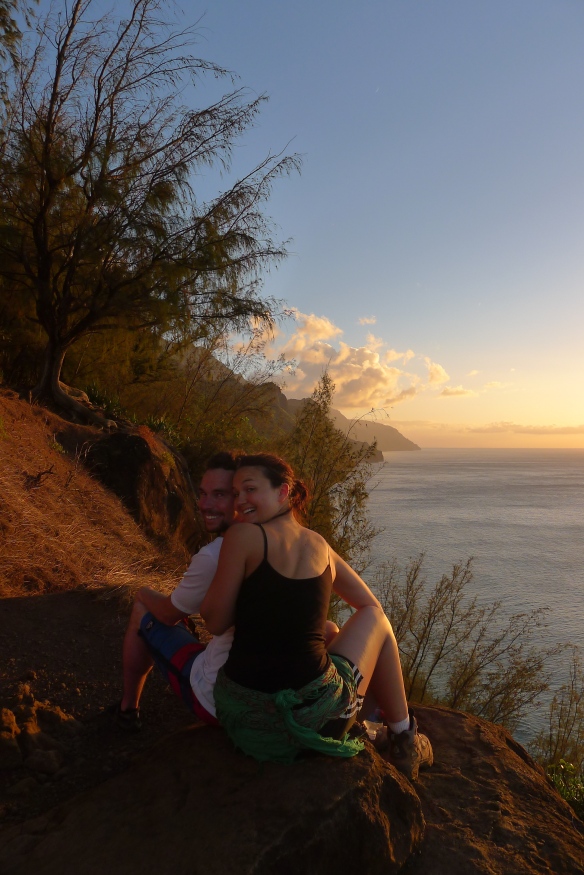 Second stop at mile 1, to take in the orange-pink beauty.

We return right after sunset, are bled dry by vampiric mosquitoes on the walk from the trailhead to the car, and, exhausted, we cop out and stay at the Coral Reef in Kapaa.

We are starved and our feet feel like bloody stumps, it’s 9 pm on Sunday night and EVERYTHING is closed. The owner of the almost closed Kapaa Cafe takes pity on us and makes us a salad and doesn’t even ask for our firstborn in return. Just cash. Aloha, man.

Papayas: a half, in the morning.
Trails: one, and so GLORIOUS.
Camelia, the star of the Awapuhi shampoo commercial.