The entire time I had this playing in my head “Ha Long, Ha Long must we sing this song”. You know – the famous U2 song …

We spent three days in Hanoi, three days so tightly packed and filled with new sights, smells and tastes that they felt more like three weeks; we were lucky enough to spend them in the company of two very experienced backpacker friends, the Murftastic Maria and Brian (http://murphtasticvoyage.wordpress.com/) who had been traveling for almost a year and covering three (or four?) continents. Our Hanoi experience culminated and ended with a lovely dinner at Ly Club, an upscale restaurant in a restored French colonial house, where everything was pitch-perfect: the food, the atmosphere and, last but not least, the perfectly preserved  century-old Citroen in the courtyard.

Of course we took advantage to pose a la roaring ’20s, complete with khakis and Birkenstocks

Early next morning we said our goodbyes to the Murftastics and headed out to Ha Long Bay: a three hour bus ride followed by a fifteen minute trip in a dingy and finally boarding the ship that was our home for the night. Ha Long Bay doesn’t require much explanation or description: its eerie karst landscape  of over 1500 limestone pillars, some large enough to be home to thousands, but most uninhabited, stretches for almost 2000 km.

The bay seen from Ti Top island; one of the few with a sliver of beach

Arches, caves, hidden coves, spectacular inverted pyramids of stone were all created by sea invasion, regression and re-invasion over millennia; but by far the more interesting version of the story comes not from geologists or the UNESCO  but from the Vietnamese people themselves. According to the legend, in Vietnam’s earliest days as a country, fierce invaders descended from the North through the sea. Ever watchful, the Jade Emperor sent Mother Dragon and her children in the ancient Vietnamese’s defense and Mother Dragon and her army incinerated the invaders on the spot with “divine fire and giant emeralds”. The emeralds from the dragon’s mouth were scattered around the battlefield on the sea and formed an invincible defensive wall, which, after thousands of years, turned into island and islets of different sizes and shapes. (Apparently even the mighty dragons are not immune to water’s erosive abilities...)

Possibly our favorite rock in the bay : we baptised this one Roca Bruja in honor of another rock (surfers will know why) and also because it seems to defy the laws of physics

Ha Long is also home to several tens of floating villages, where an entire family, sometimes three generations live all in a boat together and make a living out of fishing; according to our guide, the Vietnamese government is planning to move all of them by the end of 2014, a UNESCO requirement which I’m sure won’t sit well with many of these free-spirited fishermen and women.

The floating villages of Ha Long are picturesque enough but you can also trace the human debris right back to them; so in the name of nature preservation they will all be gone in a few years

Often 3 generations in a single boat, the floating villagers seem to enjoy their lives amongst the karst islands notwithstanding the dangers of the sea and lack of access to schools for their children 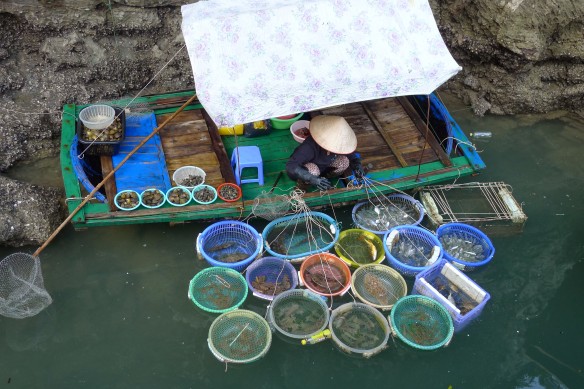 The women – and this was a common theme in Vietnam – often do the fishing, rowing, selling, haggling and money management, on top of their day jobs of cooking and child-rearing

We spent three days and two nights sailing through the bay, kayaking to hidden beaches and coves, hiking up some of the larger karst islands and spotting all kinds of wildlife and enjoying some of the most peaceful and beautiful moments of our lives. It didn’t hurt that the sun came out so we braved the 70s in short sleeves even though the locals were bundled up in their warmest parkas.

The cruise ended with a hike up to Surprise cave, a fairly large cavern way above sea level, chock-full of enormous stalactites and stalagmites and the requisite legends to accompany them. I’ve never been to Disneyland but I was told that was a plus in this instance as my slate was clean of man-made wonders – so I liked the cave quite a bit.

Speaking of very large caves: a few years ago the largest cave in the world was discovered – guess where? In central Vietnam; As much as we would have loved to see it, that particular cave is open only to visitors who are willing to shell out $3000 – on our shoe-string budget, Surprise cave it was!

We loved Ha Long so much that we decided to spend another few days on Cat Ba island – the largest in the bay – hiking the national park, scooting up and down the island like the locals did, enjoying killer coffee and pancakes and taking in some of the best sunsets in Vietnam. 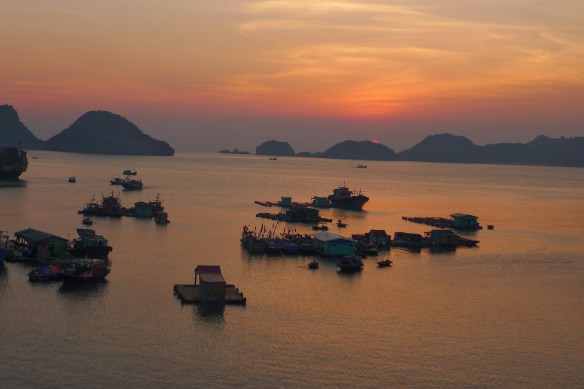 To enjoy this beautiful sunset Ed had a beer and I had a fresh passionfruit and ants juice; I hadn’t signed up for the latter but they were pleasantly tangy – Ha!

The karsts – they are everywhere

It was sad to say goodbye to the bay (it seems we are always saying goodbye to beautiful bays…) but we had to do it – new adventures awaited.

1 thought on “Bay of the Descending Dragon”