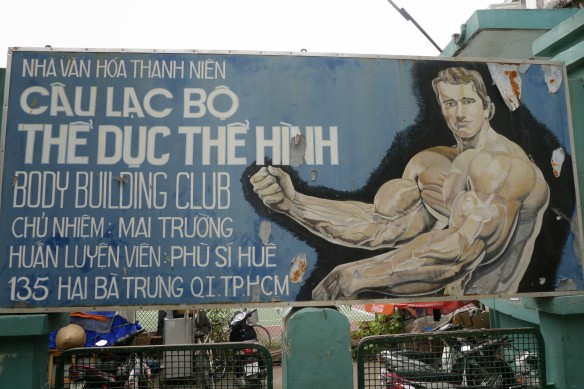 Our old governator is apparently still the universal symbol of brawn, even in Vietnam

After a short detour through Danang (a highly functional city where the local delicacy consisting of cold boiled bacon wrapped in aromatic herbs and lettuce left us both mystified and hungry) we arrived in Saigon/Ho Chi Minh in the early evening, and promptly got stuck in traffic.

In hindsight, after reading Andrew Pham’s Catfish and Mandala, any attempt to describe Ho Chi Minh’s traffic would be futile or artless, so here’s what he has to say about it:  “There are no lane markings, no shoulders, … just one big long river of asphalt boiling with Brownian motion. The engines roar, the animals bleat, the horns, the curses and the screams all boil into a fantastic cacophony.” Catfish and Mandala, by the way, is a phenomenal travel book that i would highly recommend it to anyone planning a trip to Southeast Asia or any sort of personal “roots” trip. As he’s a denizen of the Bay Area and the Golden Gate bridge was his launchpad, too, we related and really enjoyed his book. Which is not to say that it’s a light summer reading – this ain’t no “Shopaholic Meets Uncle Ho” novelette – read at your own peril!  We realized soon enough that we were not quite ready to join the Asphalt Jungle, which seemed even more hectic than Hanoi, with fevered Christmas preparations everywhere and hordes of locals decked in their wintery best, raindeer horns included, lining up for interminable, highly directed photo sessions with the Christmas ornaments in front of Barney’s – so we skipped town after three days, having accomplished the following:

We made the above list and checked it twice (by this time Christmas songs have fully permeated our bubble of season denial) and then we were off to the Mekong Delta. As an aside, let it be said that after – weeks AFTER – we completed our tour, the New York Times came out with the 52 Top Places to visit in 2014 and the Mekong Delta ranked 35th. Since words don’t really do it justice, here are some pics. Enjoy!

It all started with a ride up and down the inner canals of the Delta, a sampling of the locals’ daily commute 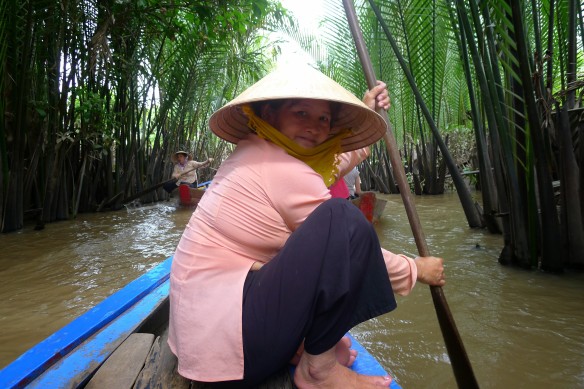 Our captain, like on most of the other boats, was a middle-aged lady who rammed with the strength of a small bull and the agility of an eel along the narrow canal and busy two-way boat traffic

Next stop: Candyland. Coconut candy flavored with everything under the sun, from banana leaf, which tasted exceedingly fresh, to snake. 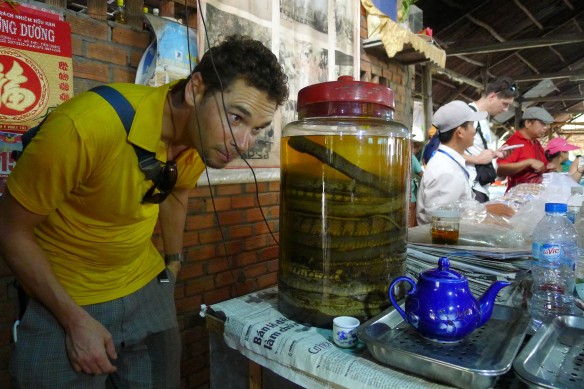 OK, maybe I was joking about the snake flavored candy, but not about the liquor. Ed actually made me drink this and it tasted faintly of formaldehyde. Apparently the snakes go in the alcohol jar while still alive, so they die a happy death…

Stop two: rice noodle factory. This here is a display of rice noodle-making prowess: the man is a natural

Subtly color-coordinated (that’s how we roll) we walk the fine bamboo line that is a bridge at the crocodile farm. But don’t get excited, there are no crocs below

Local cuisine in a nutshell (from right to left): chicken, rats, snake (the sausage-like thing), frog. Out of sight: bog snails fried in butter. Bon Appetit! 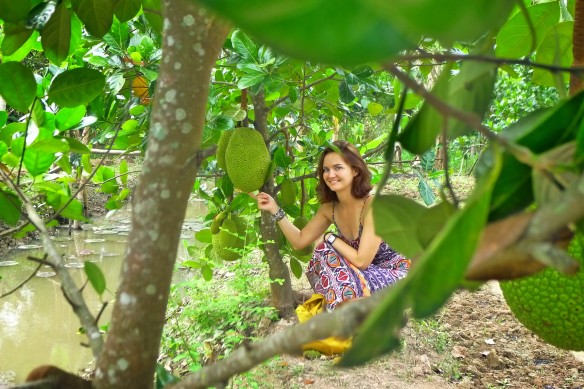 A typically sized jackfruit in the fruit orchard we visited. I must confess that I was sitting directly underneath another gigantic one and was very much fearing for my life.

We spent a few ‘recovery’ days in Can Tho, one of the larger towns in the Delta, sampling the local cuisine and hanging out. This was a pretty typical food stall at the local market that we frequented a few times per day.

We spent our last night in Vietnam in Chau Doc, a border town with much to offer, including hikes in the nearby mountains and some cool temples. We only had enough time to dine on the restaurant boat that floated on the Mekong. 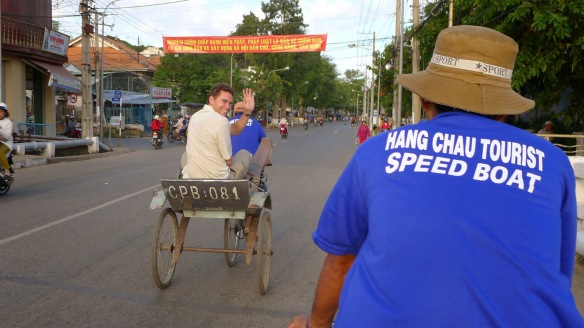 Au revoir Vietnam! It’s been lovely and we will miss you…

After three weeks in Vietnam, we crossed the border into Cambodia on a speedboat. We were excited to move on to our next destination, but also nostalgic at the same time. Vietnam was a ride and a half and a baptism by fire for us South East Asia first-timers. Tam Biet! A la prochaine!